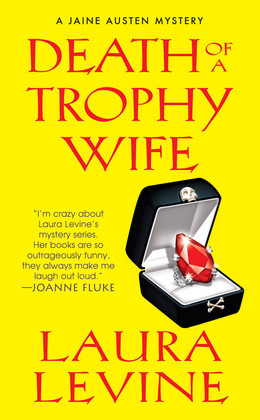 Death of a Trophy Wife

Jaine Austen #9
by Laura Levine (Author)
Buy for $7.59 Excerpt
Fiction Mystery & detective Women sleuths English literature American and Canadian literature
warning_amber
One or more licenses for this book have been acquired by your organisation details

Without a job or a date in sight, freelance writer Jaine Austen is equally out of luck in finance and romance. So when her friend Lance offers to treat her to brunch at the Four Seasons, Jaine leaps at the invite. They've barely made it through the menu when Lance spots his friend Bunny, who is the new trophy wife of mattress maven Marvin Cooper.

When Bunny generously offers Jaine a gig writing Marv's new advertising campaign, Jaine accepts the job, and an invitation to her upcoming soirée. But at the party Bunny cruelly rules the Cooper mansion and before the evening is over, someone poisons Bunny.

The police arrest Lance, but Jaine knows his murderous urges end at her closet door. Setting out to clear his name, she soon discovers a list of suspects longer than Bunny's credit card bill. . .

"Zany. . .series fans will find Jaine as funny as ever." --Publishers Weekly

"If you love a good mystery, this book is for you." --New York Journal of Books