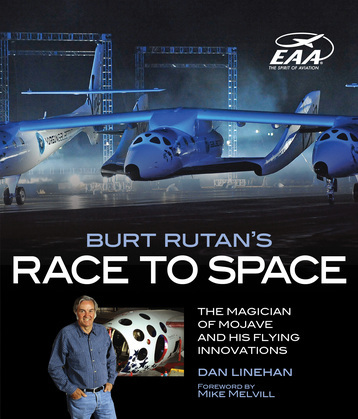 Years ago, Burt Rutan told a reporter for Popular Mechanics, “If we make a courageous decision like the goal and program we kicked off for Apollo in 1961, we will see our children or grandchildren in outposts on other planets.” Legendary science-fiction writer Arthur C. Clark would later recall Rutan’s quote in a piece he wrote about SpaceShipOne and comment, “Fortunately, we need not rely solely on governments for expanding humanity’s presence beyond the Earth.”

Burt Rutan’s Race to Space showcases Rutan’s herculean efforts to do just that. Smithsonian’s Air and Space Museum displays his most celebrated achievements, including SpaceShipOne, which won the coveted $10 million Ansari X Prize for private spaceflight; Voyager, which hangs with SpaceShipOne in the Milestones of Flight gallery; the Virgin Atlantic GlobalFlyer; and the VariEze. His many aerospace innovations preceding his most recently conceived designs, SpaceShipTwo and WhiteKnightTwo, chronicle a progressive, step-by-step attempt to break barriers with engineering know-how and a wondrous imagination, all the while remaining on the forefront of the burgeoning private spaceflight industry. Rutan’s X Prize triumph and subsequent spacecraft designs are not a beginning, nor an end, but are steps in Burt Rutan’s continuing adventure to expand humanity’s presence beyond the Earth and into space.