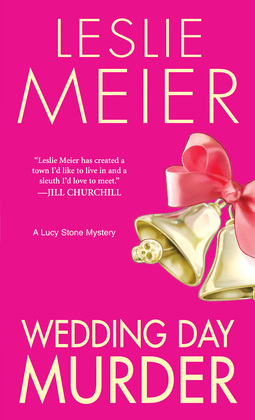 Lucy Stone #8
by Leslie Meier (Author)
Buy for $6.18 Excerpt
Fiction Mystery & detective
warning_amber
One or more licenses for this book have been acquired by your organisation details
New York Times-Bestselling Author: A millionaire is found dead near his yacht, and a local mom launches an investigation…

Already juggling four kids’ hectic schedules, a rambunctious dog, an attention-craving husband, and a full-time reporter job, Lucy Stone can't possibly squeeze in another responsibility...or can she? There’s a big wedding coming up, and Lucy’s promised her friend she’ll help arrange the lavish event in a newly built gazebo. Too bad the groom, internet millionaire Ron Davitz, is getting on the nerves of the locals, especially after their boats were displaced to make room for his yacht.

When Ron’s body is found floating in the harbor, Lucy isn’t convinced it was accidental. From the picturesque waterfront to tony Smith Heights Road, Tinker's Cove is awash with suspects. Now, fresh from wedding planning, Lucy finds herself contemplating her own funeral as she pursues a killer who’ll do anything to keep from being unveiled….