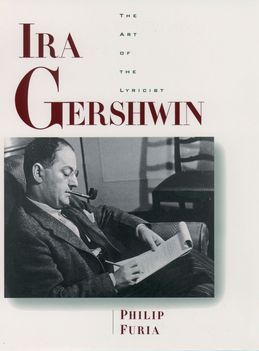 Ira Gershwin: The Art of the Lyricist

To the perennial question which comes first, the music or the words? Ira Gershwin always responded, the contract. The jest reveals both Iras consummate professionalism and the self-effacing wit with which he ducked the spotlight whenever possible. Yet the ingeniously inventive melodies George Gershwin composed for such classic songs as Someone to Watch Over Me, Embraceable You, Fascinating Rhythm, It Aint Necessarily So, and Love is Here to Stay live on in no small part because of the equally unforgettable lyrics of Ira Gershwin, lines crafted with a precision that earned him the sobriquet The Jeweller among his Broadway peers. In Ira Gershwin: The Art of the Lyricist, the older and less flamboyant of the Gershwin brothers at last steps out of the shadows to claim his due as one of American songwritings most important and enduring innovators. Philip Furia traces the development of Ira Gershwins lyrical art from his early love of light verse and Gilbert and Sullivan, through his apprentice work in Tin Pan Alley, to his emergence as a prominent writer for the Broadway musical theater in the 1920s. Furia illuminates his work in satirical operettas such as Of Thee I Sing and Strike Up the Band, the smart little revues of the 1930s, and his contributions to the opera Porgy and Bess. After describing the Gershwin brothers brief but brilliant work in Hollywood before Georges sudden death--work that produced such classics as They Cant Take That Away From Me and Lets Call the Whole Thing Off--Furia follows Iras career through such triumphs as Lady in the Dark with Kurt Weill, Cover Girl with Jerome Kern, and A Star is Born, with Harold Arlen. Along the way, Furia provides much insight into the art of the lyricist and he captures the magic of a golden era when not only the Gershwins, but Irving Berlin, Cole Porter, Jerome Kern, Oscar Hammerstein II, Gertrude Lawrence, Fred Astaire, and other luminaries made the lights of Broadway and the Hollywood screen shine brighter than ever before. From his first major success, the now-classic The Man I Love (1924) to his last great hit, The Man That Got Away (1954), Ira Gershwin wrote the words to some of Americas most loved standards. In Ira Gershwin: The Art of the Lyricist, Philip Furia illuminates the craft behind this remarkable achievement to reveal how Gershwin took the everyday speech of ordinary Americans and made it sing.