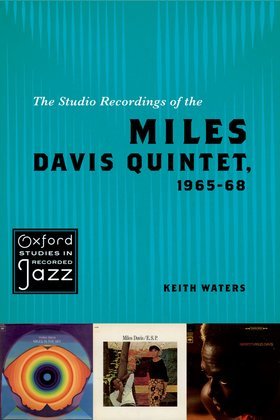 The Studio Recordings of the Miles Davis Quintet, 1965-68

The Second Quintet -- the Miles Davis Quintet of the mid-1960s -- was one of the most innovative and influential groups in the history of the genre. Each of the musicians who performed with Davis--saxophonist Wayne Shorter, pianist Herbie Hancock, bassist Ron Carter, and drummer Tony Williams--went on to a successful career as a top player. The studio recordings released by this group made profound contributions to improvisational strategies, jazz composition, and mediation between mainstream and avant-garde jazz, yet most critical attention has focused instead on live performances or the socio-cultural context of the work. Keith Waters The Studio Recordings of the Miles Davis Quintet, 1965-68 concentrates instead on the music itself, as written, performed, and recorded. Treating six different studio recordings in depth--ESP, Miles Smiles, Sorcerer, Nefertiti, Miles in the Sky, and Filles de Kilimanjaro--Waters has tracked down a host of references to and explications of Davis work. His analysis takes into account contemporary reviews of the recordings, interviews with the five musicians, and relevant larger-scale cultural studies of the era, as well as two previously unexplored sources: the studio outtakes and Wayne Shorters Library of Congress composition deposits. Only recently made available, the outtakes throw the master takes into relief, revealing how the musicians and producer organized and edited the material to craft a unified artistic statement for each of these albums. The authors research into the Shorter archives proves to be of even broader significance and interest, as Waters is able now to demonstrate the composers original conception of a given piece. Waters also points out errors in the notated versions of the canonical songs as they often appear in the main sources available to musicians and scholars. An indispensible resource, The Miles Davis Quintet Studio Recordings: 1965-1968 is suited for the jazz scholar as well as for jazz musicians and aficionados of all levels.