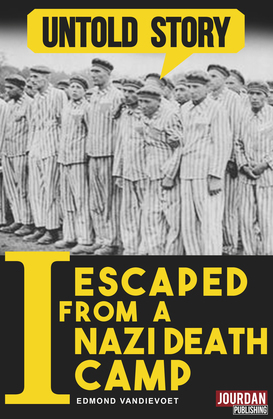 I Escaped from a Nazi Death Camp

May 1940. Edmond Vandievoet is 34 and wishes only one thing: to serve his country.

Enrolled in the Belgian army, he will escape captivity a first time and will flee to Paris, where he will specialize in the passing of men and equipment between Brussels and the French capital.

Arrested several times, evaded as many times, Edmond Vandievoet will be imprisoned in the Buchenwald concentration camp, from which he will be the only one to escape.
It is only after an extraordinary travel through the nazi Germany, weakened by the starvation and cold, that Edmond will come back to Belgium, and then France, to enjoy a peaceful and well deserved retirement.

Discover this extraordinary story of a man who fought his heart and soul to survive. An incredible testimony that will plunge you into the darkest times of the Second World War.

Edmond Vandievoet was, without a doubt, a great resistant and an incredible man of action.

Like all Belgian men of my age, I had been conscripted nine months previously, awaiting the fatal attack which, as the days went by, seemed less and less imminent. Hadn’t the High Command, on that evening of 9 May 1940, begun to allow home leave again? The mild spring twilight gave no hint of the torrent of blood and fire that would sweep down on Belgium and her neighbours the very next day.
On the 10th of May, there were hardly any soldiers to be seen in the Roman city of Tongres, on the borders of Limbourg, in the province of Liège. And while the German Stukas rained down their cargoes of bombs on the town, I crept through the streets towards the supply store of my Company.