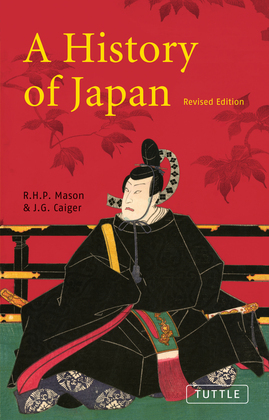 A History of Japan: Revised Edition

A classic of Japanese history, this book is the preeminent work on the history of Japan.

Newly revised and updated, A History of Japan is a single-volume, complete history of the nation of Japan. Starting in ancient Japan during its early pre-history period A History of Japan covers every important aspect of history and culture through feudal Japan to the post-cold War period and collapse of the Bubble Economy in the early 1990's. Recent findings shed additional light on the origins of Japanese civilization and the birth of Japanese culture.

Also included is an in-depth analysis of the Japanese religion, Japanese arts, Japanese culture and the Japanese People from the 6th century B.C.E. to the present. This contemporary classic, now updated and revised, continues to be an essential text in Japanese studies. Classic illustrations and unique pictures are dispersed throughout the book.

This contemporary classic continues to be a central book in Japanese studies and is a vital addition to the collection of any student or enthusiast of Japanese history, Japanese culture, or the Japanese Language.
Publication date
August 30, 2011
Publisher
Tuttle Publishing
Page count
408
ISBN
9781462900978
Paper ISBN
9780804820974
File size
5 MB