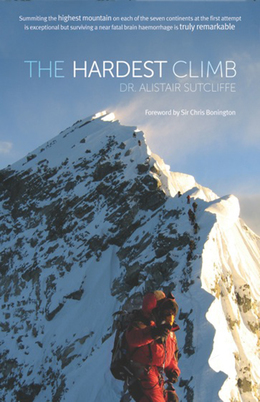 Sir Chris Bonnington. " Success on all the seven summits is a feat in itself, made all the more remarkable by the fact thay wre all summited at their first attempt. However, Alistair's hardest climb is his recovery from a near fatal brain haemmorhage. All of the survival skills that a climber uses every day in the mountains have, undoubtedly, helped prepare Alistair for this, his greatest challenge." On the 1st February 2010 Alistair Sutcliffe suffered a massive brain haemorrhage. The doctors told his wife to say her last goodbyes as he wouldn't survive the night. He did. In this remarkable story Alistair recounts how he became the first man to summit the highest mountain on each of the seven continents at the first attempt. He has endured the harshest climates, been held at gunpoint, seen climbers fall to their deaths and stood on top of the world, but his hardest climb started on the 2nd February 2010, the morning after his brain haemorrhage.