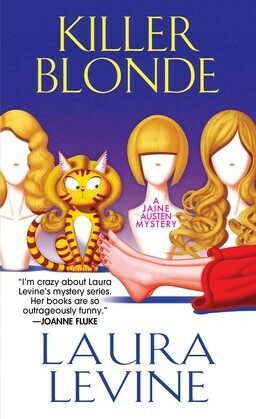 Jaine Austen #3
by Laura Levine (Author)
Buy for $7.59 Excerpt
Fiction Mystery & detective Women sleuths English literature American and Canadian literature
warning_amber
One or more licenses for this book have been acquired by your organisation details

A gal with a serious Ben & Jerry's habit can't afford to be too picky about employment opportunities. So when Beverly Hills socialite SueEllen Kingsley offers freelance writer Jaine Austen megabucks to ghostwrite a book of hostess tips, it's time to sharpen the #2s.

But everything short circuits when Jaine finds SueEllen floating face down in her tub, fried by her own blow dryer. The primary suspect: Heidi, SueEllen's stepdaughter, whose account of a mysterious blonde fleeing the scene is greeted with skepticism by Beverly Hills' finest. Peroxided suspects abound, including a very private masseuse, a jealous nurse, a former game show hostess. . .even a closet blonde with a surprising secret. One of them is hiding a murderous heart behind pricey highlights, and Jaine's out to expose the killer's dark roots. Because blondes have enough fun without getting away with murder. . .

"Levine's series gets stronger with each book. Her dialogue is realistic yet hilarious, and her vivid characters jump off the page." -Romantic Times

"The identity of the real killer comes as [a] smart surprise." --Publishers Weekly