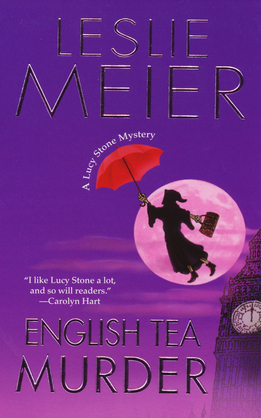 Lucy Stone #17
by Leslie Meier (Author)
Buy for $7.59 Excerpt
Fiction Mystery & detective Women sleuths
warning_amber
One or more licenses for this book have been acquired by your organisation details
New York Times-Bestselling Author:“Fans of Murder, She Wrote may want to try this…a series that is well written and enjoyable.”—The Evansville Courier and Press

Between her family and her reporting duties for the Tinker’s Cove, Maine Pennysaver, Lucy Stone could use a break. So when a friend tells her about a trip to England sponsored by Winchester College, she jumps at the chance for a girls’ getaway. But when the professor leading the tour dies mid-flight after an asthma attack, Lucy’s glad she packed her sleuthing skills.

In London, Professor Quentin Rea, a ladies’ man and former flirt of Lucy's, arrives to take over the tour—and she finds that while his hairline has receded, his amorous intentions have not. And as Lucy notices some peculiar behavior and uncovers some surprising connections—and then another tour member dies—she winds up in a daring scheme to find a mastermind of murder…

“There’s plenty here to please Meier’s followers and fans of cozy mysteries…Meier pays homage to all the tried and true British high points, from the Tower of London and its resident ravens to tea shops, strawberry jam and Devonshire cream, to the glories of Stonehenge at sunset.”—BookPage