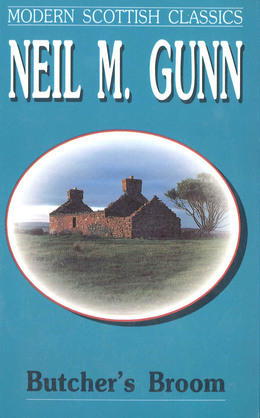 by Neil Gunn (Author)
Excerpt Buy for $14.24
Fiction
Butcher's Broom is one of Gunn's epic recreations of a key period in Scottish history, the Highland clearances of the nineteenth century. Gunn captures the spirit of Highland culture, the sense of community and tradition, in a manner that speaks to our own time. At the centre of the novel is Dark Mairi who embodies what is most vital and lasting in mankind, whose values encapsulate what was lost in Scotland to make way for progress while her land was cleared to make way for wintering sheep.

The weaving of traditional ballads with the lives of Gunn's characters evokes the community that must be destroyed. Elie lost among strangers with her fatherless child while Seonaid defies the invaders, fighting them from the roof of her croft. This is among the most moving of Gunn's works and establishes the belief in a transcendent spirituality that would be so dominant in his later work.
Publication date
January 03, 2011
Publisher
Souvenir Press
Collection
Page count
430
ISBN
9780285640030