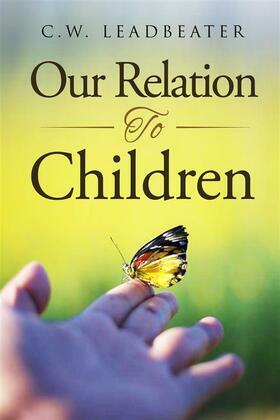 Our Relation to Children

by C.W. Leadbeater (Author)
Buy for €0.99
Nonfiction Health & fitness Daily living Education
warning_amber
One or more licenses for this book have been acquired by your organisation details

It cannot be denied that from the theosophical standpoint the subject of our relation to children is an exceedingly important and practical one. Realizing, as we must, the purpose for which the ego descends into incarnation, and knowing to how great an extent its attainment of that purpose depends upon the training given to its various vehicles during their childhood and growth, we cannot but feel, if we think at all, that a tremendous responsibility attaches to all of us who are in any way connected with children, whether as parents, elder relatives, or teachers. It is well, therefore, that we should consider what hints Theosophy can give us as to the way in which we can best discharge this responsibility. It may seem presumptuous that a bachelor should venture to offer suggestions to parents upon a subject so especially their own; so I ought, perhaps, to preface such remarks as I wish to make by saying that, though I have none of my own, I have always been fond of children, and in very close relation with them through almost the whole of my life — for many years as a Sunday school teacher, then as a clergyman, school-manager and choir trainer, and as headmaster of a large boys' school. Before making suggestions, however, I should like to draw attention to the present condition of our relation to children in the midst of European civilization. Our children regard grown-up people with scarcely veiled hostility, or, at the best, with a kind of armed neutrality, and always with deep distrust, as foreigners whose motives are incomprehensible to them, and whose actions are perpetually interfering in the most unwarrantable and apparently malicious manner with their right to enjoy themselves in their own way. I should strongly advise every parent to read K. Grahame's The Golden Age; it puts the children's point of view better than any other book which I know. Many a man, or woman, thinks of children only as noisy, dirty, clumsy, selfish and generally objectionable; and he never realizes that there may be a good deal of selfishness in this point of view of his, and that if any part of his indictment is true, the fault has been not so much in the children themselves as in the unreasonable way in which they have been brought up; furthermore, that in any case his duty is not to widen the chasm between them and himself by adopting an attitude of dislike and distrust, but rather to endeavour to improve the position of affairs by judicious kindness and hearty, patient friendliness. Surely there is something wrong about such unsatisfactory relations; surely some improvement might be brought about in this unfortunate condition of mutual hostility. Of course, there are honourable exceptions, there are children who trust their teachers and teachers who trust their students, and I myself have never found any difficulty in winning the confidence of the juveniles by treating them properly; but in a sadly large number of instances the case is as I have described it.