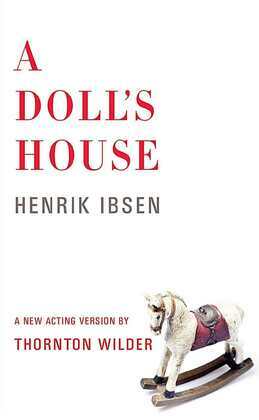 "In [Wilder's] A Doll's House . . . the relationship of dialogue to action is very special, like nothing that had been heard on stage before."—David Hammond, PlayMakers Repertory Company

Not staged since its Broadway premiere starring Ruth Gordon in 1937, the first-ever publication of this adaptation of Henrik Ibsen's classic drama is revitalized through the shrewd lens of American drama master, Thornton Wilder. With his famous, clarifying dialogue, Wilder uproots this classic from Norway and funnels it through an American lens. The marriage of Ibsen's famed naturalistic style melds with Wilder's knack for emotional nuance to create a rich, demonstrative edition of the revered standard A Doll's House.

Henrik Ibsen has often been referred to as the father of realistic drama. The Norwegian playwright is best known for his major works Brand, Peer Gynt, Emperor and Galilean, A Doll's House, Ghosts, An Enemy of the People, The Wild Duck, Hedda Gabler, and The Master Builder.

Thornton Wilder was an accomplished novelist and playwright in the twentieth century. Two of his four major plays garnered Pulitzer Prizes, Our Town (1938) and The Skin of Our Teeth (1943). His play The Matchmaker was later adapted into the record-breaking musical Hello, Dolly! The Bridge of San Luis Rey, one of his seven novels, won the Pulitzer Prize in 1928, and his next-to-last novel, The Eighth Day received the National Book Award (1968). Our Town continues to be the most produced American play in the world.