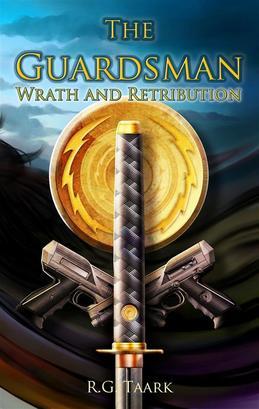 by R.G. Taark (Author)
Buy for €2.99
Fiction Science fiction Action & adventure
warning_amber
One or more licenses for this book have been acquired by your organisation details

A lone man who carries the name of the Empire's ultimate shame and anonymity, ‘John Smith.’ Stripped of everything from his past, cast out and stumbling through the world he sees everything he grew up believing with new eyes. The harsh realities of his world nip at his flanks and heels every day of his new life, while memories and painful traumas of his old life plague his days and even nights.

Samson opened his eyes with a splitting headache and dry mouth, feeling slightly disoriented from the flooding rush of his life's memories over two decades prior. The series of dreams had assaulted him like the days they had happened all tumbled together. The first was pleasant, but the second left him feeling like he was still experiencing it. It took him several breaths to realize that he was indeed older and these injuries were fresh, not inflicted by the dream. The confusion between the threshold of waking and jarring dreams was disorienting, made worse by the fog of painkillers. He was stiff and sore like he had spent all day lifting weights, not stretched after and then had laid stationary for hours. The glare from the lighting was oppressive, like it was being shined directly into his brain straight through his closed lids.

With an irritated groan he turned his head to the left.

The stabs of pain, and protesting muscles in his neck and back made him wish he hadn't.

Cracking his eyes, knowing he wasn't going to be able to sleep anymore, the three human shaped shadows solidified into Persephone, and her mother and father. Samson's painful irritation at waking up in such miserable conditions quickly turned to confusion as he looked around the unfamiliar room, washed out in glaring light, turning his eyes only. Since everything else hurt to move, including his grumpy waking up face, he decided not to push his luck.

Why everyone was looking at him was disconcerting.

Why he was in a strange bed was puzzling.

How he arrived here was confusing.

And why Lady Celine was in a similarly uncomfortable bed next to him was baffling.

Persephone leaned forward and shoved something cold between his lips. Her only instruction was, "Open."

Curiosity giving way to trust, Samson realized it was an ice chip. The sweet explosion of cold and wet water in his mouth tasted better than any meal he had ever had.

The prone Lady Celine was the first to sarcastically assault him, "So Mister 'First Gladiator of the Empire', what has been running through your head the last three quarters of an hour?"

Baffled by the question, a different question of his own arrived in his mind. All he could croak through his dried tongue and lips was, "Time?" Lady Celine looked sunken and pale, in her bed. The fluid tubes running into her from every direction indicated 'hospital' of some kind as his brain started coming up to speed.

Phyllip grumbled, "Almost time for dinner, and time for you to answer the question."