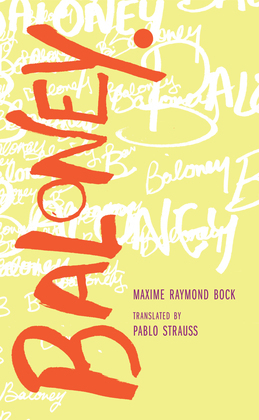 by Raymond Bock (Author), Pablo Strauss (Translator)
Buy for $9.95
Fiction Literary Nonfiction Literary collections Canadian
warning_amber
One or more licenses for this book have been acquired by your organisation details

A Tristram Shandy–esque novella about failing memory and failed writing, from one of French Canada’s most exciting new voices.

A young, floundering author meets Robert ‘Baloney’ Lacerte, an older, marginal poet who seems to own nothing beyond his unwavering certainty. Over the course of several evenings, Lacerte recounts his unrelenting quest for poetry, which has taken him from Quebec’s Boreal forests to South America to East Montreal, where he seems poised to disappear without a trace. But as the blocked writer discovers, Lacerte might just be full of it.

‘[Bock’s] deeply original writing always seeks out the mot juste, then sculpts them into sentences that describe the slightest variations of human emotions in spectacular complexity, harnessing the power of form, rhythm, and sound.’

‘Books are dangerous. They call into question the order of things, turn the world upside down to get a better sense of it and shake the dust off the lenses we look through. [...] No one can say where this book by Maxime Raymond Bock will take us. It’s an incandescent plea for the latent powers of literature, something like a necessity.’

‘Crackles with the energy of a QueÃ©bÃ©cois folk song, impassioned and celebratory but also melancholy and cheekily ironic ... As in BolaÃ±o’s work, narrative itself is often the subject; stories are folded within other stories and narrators are constantly asserting their presence ... Like BolaÃ±o, Bock alternates between rage, sorrow, protest, and dark comedy, and the two writers share a sense of urgency –of writing against time as much as about it.’