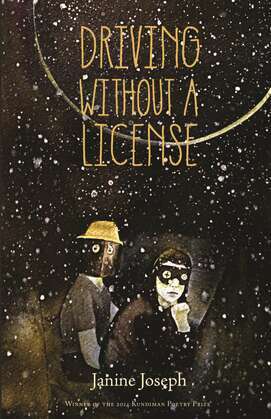 Driving Without a License

by Janine Joseph (Author)
Buy for $15.99 Excerpt
Fiction Poetry
warning_amber
One or more licenses for this book have been acquired by your organisation details

"Janine Joseph writes with an open and easy intimacy. The language here is at once disruptive and familiar, political and sensual, and tinged by the melancholy of loss and the discomforting radiance of redemption. A strong debut." —Chris Abani

The best way to hide is in plain sight. In this politically-charged and candid debut, we follow the chronicles of an illegal immigrant speaker over a twenty-year span as she grows up in the foreign and forbidding landscape of America.

I strained for the socket
as you pulled me,
my bare legs against your legs

in the windowless dark. The room,
snuffed out,

could have been no
larger than a freight car,
no smaller than a box van;

we couldn't tell anymore, the glints
in the shellacked floor, too,

were dulled. This is like death, you said,
always joking. I slid my head
into the crook of your neck,

Raised in the Philippines and California, Janine Joseph holds an MFA from New York University and a PhD from the University of Houston. Her poems have appeared in the Kenyon Review Online, Best New Poets, Hayden's Ferry Review, and elsewhere. Her libretto "From My Mother's Mother" was performed as part of the Houston Grand Opera's "Song of Houston: East + West" series. A Kundiman and Paul and Daisy Soros Fellow, she is an assistant professor of English at Weber State University.