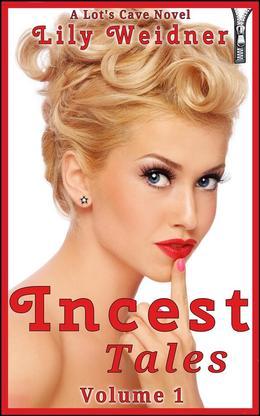 DESCRIPTIONFocusing on one family’s immoral love, this three story collection features the limitless pleasure of incestuous sex. A voluptuous mother finds herself dominated by her handsome son, daddy finds himself seduced by his alluring daughter, and a naughty sister finds herself punished by her older brother. With their taboo lusts running rampant, what forbidden acts will this loving family unlock?CONTENTSThree Lily Weidner Incest Short Tales consisting of:Incest Tales 1: CaughtIncest Tales 2: SeductionIncest Tales 3: PunishedEXCERPTJoe halted abruptly in the doorway when he caught sight of his mother’s panties. The vibrant shade of red stood out against his mother’s milky white thighs, forcing his gaze to linger. His mother, just in her early forties, embodied Joe’s standards of beauty.Whether she knew of his attraction or not, he couldn’t say. He suspected though, that the lingering looks she received from others his age told her enough. As his cock hardened, Joe wanted relief. Still, he couldn’t bring himself to disrupt the alluring sight in front of him.Lianne hummed to herself, the task of cleaning floors on her hands and knees soothing her soul. Frustrated with her husband nearly always out working, she welcomed the distraction. What if someone caught her this way on hands and knees, then forced her to submit to them? Would someone know the terrible humiliations she wanted to suffer? Her mind often betrayed her while scrubbing the floor, sparking fantasies that both thrilled and confused her. What if her son found her this way? Worse, what if he decided to take advantage of her?Oh, God! That was the most forbidden and immoral of her fantasies.Why she thought such things about her son, and even her daughter, she didn’t care to know. But, with the house to herself during the day, she busied herself with any housework available. Washing the floors quickly became the one task she always looked forward to. Though, if forced to admit the truth, Lianne would have confessed to an ulterior motive. Spending so much time on her hands and knees always triggered surges of forbidden thoughts to enter her mind that absolutely soaked her silky panties.Joe noticed the wet crotch of his mother’s sheer panties and wondered what she could possibly be fantasizing about. Seeing his mother bent over, revealing her femaleness to him made his throbbing cock become an overwhelming discomfort that craved satisfaction. Nothing though, could sate his desire; nothing less than the opportunity to thrust his cock directly into mom.