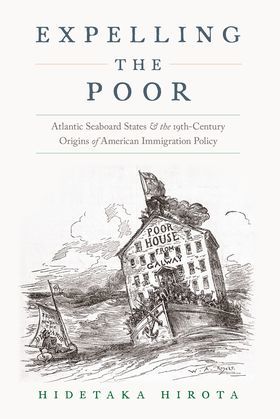 Historians have long assumed that immigration to the United States was free from regulation until anti-Asian racism on the West Coast triggered the introduction of federal laws to restrict Chinese immigration in the 1880s. Studies of European immigration and government control on the East Coast have, meanwhile, focused on Ellis Island, which opened in 1892.In this groundbreaking work, Hidetaka Hirota reinterprets the origins of immigration restriction in the United States, especially deportation policy, offering the first sustained study of immigration control conducted by states prior to the introduction of federal immigration law. Faced with the influx of impoverished Irish immigrants over the first half of the nineteenth century, nativists in New York and Massachusetts built upon colonial poor laws to develop policies for prohibiting the landing of destitute foreigners and deporting those already resident to Europe, Canada, or other American states. These policies laid the foundations for federal immigration law. By investigating state officials' practices of illegal removal, including the overseas deportation of citizens, this book reveals how the state-level treatment of destitute immigrants set precedents for the use of unrestricted power against undesirable aliens. It also traces the transnational lives of the migrants from their initial departure from Ireland and passage to North America through their expulsion from the United States and postdeportation lives in Europe, showing how American deportation policy operated as part of the broader exclusion of nonproducing members from societies in the Atlantic world.By locating the roots of American immigration control in cultural prejudice against the Irish and, more essentially, economic concerns about their poverty in nineteenth-century New York and Massachusetts, Expelling the Poor fundamentally revises the history of American immigration policy.