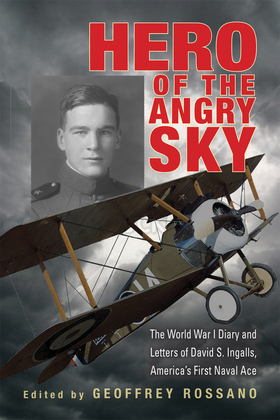 Hero of the Angry Sky

Hero of the Angry Sky draws on the unpublished diaries, correspondence, informal memoir, and other personal documents of the U.S. Navy?s only flying ?ace? of World War I to tell his unique story. David S. Ingalls was a prolific writer, and virtually all of his World War I aviation career is covered, from the teenager?s early, informal training in Palm Beach, Florida, to his exhilarating and terrifying missions over the Western Front. This edited collection of Ingalls?s writing details the career of the U.S. Navy?s most successful combat flyer from that conflict.

While Ingalls?s wartime experiences are compelling at a personal level, they also illuminate the larger, but still relatively unexplored, realm of early U.S. naval aviation. Ingalls?s engaging correspondence offers a rare personal view of the evolution of naval aviation during the war, both at home and abroad. There are no published biographies of navy combat flyers from this period, and just a handful of diaries and letters in print, the last appearing more than twenty years ago. Ingalls?s extensive letters and diaries add significantly to historians? store of available material.