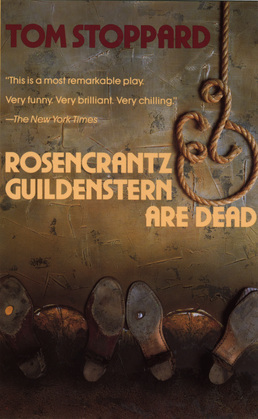 Rosencrantz and Guildenstern Are Dead

de Tom Stoppard (Autor)
Comprar por 31,00 $ Extracto
Ficción Drama
warning_amber
One or more licenses for this book have been acquired by your organisation details
Acclaimed as a modern dramatic masterpiece, Rosencrantz & Guildenstern are Dead is the fabulously inventive tale of Hamlet as told from the worm’s-eve view of the bewildered Rosencrantz and Guildenstern, two minor characters in Shakespeare’s play. In Tom Stoppard’s best-known work, this Shakespearean Laurel and Hardy finally get a chance to take the lead role, but do so in a world where echoes of Waiting for Godot resound, where reality and illusion intermix, and where fate leads our two heroes to a tragic but inevitable end.

Tom Stoppard was catapulted into the front ranks of modem playwrights overnight when Rosencrantz and Guildenstern Are Dead opened in London in 1967. Its subsequent run in New York brought it the same enthusiastic acclaim, and the play has since been performed numerous times in the major theatrical centers of the world. It has won top honors for play and playwright in a poll of London Theater critics, and in its printed form it was chosen one of the “Notable Books of 1967” by the American Library Association.
Format
EPUB
Protección
Watermark
Fecha de publicación
1 de diciembre de 2007
Editor
Grove Press
Colección
Tom Stoppard
Número de páginas
128
ISBN
9781555848941
ISBN papel
9780802132758
El editor no ha proporcionado información sobre accesibilidad.
2229516
item