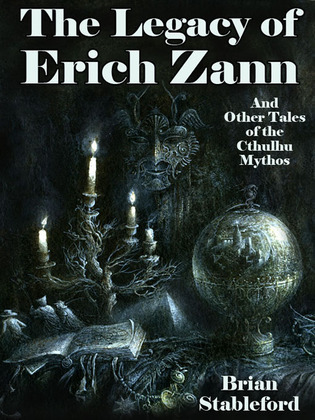 by Brian Stableford (Author)
Buy for $2.99 Excerpt
Fiction Fantasy Short stories English literature British literature
warning_amber
One or more licenses for this book have been acquired by your organisation details

In the longest of the four Cthulhu Mythos stories in this collection, "The Legacy of Erich Zann," the violin and the music that the ill-fated musician left behind become the target, some fifteen years later, for a mysterious searcher who will stop at nothing--including murder--to obtain them. Edgar Allan Poe's great detective, Auguste Dupin, who's endangered because of his connection to Zann, must not only figure out who--but why.

In the original novella, "The Seeds from the Mountains of Madness," it turns out that the famous Captain Oates, whose body was never found after he left Scott's tent in the Antarctic, did not die after all--or, if he did, still retained his ability to function in the world. Sent back to England with a mission to fulfill, Oates seeks the help of an old school friend, a veteran of the Great War--who must also play detective, endeavoring to determine who or what has sent Oates back--and, of course, why!

Also included are two short stories, "The Holocaust of Ecstasy" and "The Truth About Pickman."