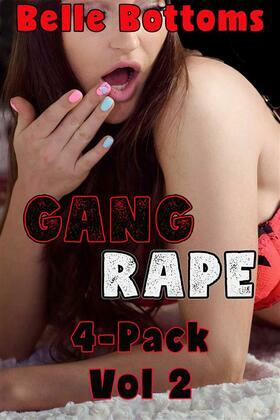 by Belle Bottoms (Author)
Buy for €5.99 Excerpt
Nonfiction Nature, recreation and sports Antiques & collectibles Art Subjects & themes Erotica Fiction Erotica
warning_amber
One or more licenses for this book have been acquired by your organisation details

Included in this 4-Pack:

Gang Raped by My Daddy and His Poker Buddies

Gang Raped at the Family Reunion

Gang Raped by a Small Town

Gang Raped in a Trailer Park

From Gang Raped by a Small Town:

"You won't be needing these," he said with a laugh. “Now put your left foot in the stirrup." I did what he said and felt his fingers slide up inside my pussy as he pushed me up and onto the horse.

"Whoa, she's already nice and wet," he said to the cop who was up on the horse.

“Now you just swing that leg of yours over the saddle and set yourself down right here," the cop said as he patted the dildo-shaped horn.

"You’ve got to be kidding! You expect me to ride on that thing?" I said as I gawked at him.

"I expect you to ride on both of these things," he said as he wagged his cock at me.

"No! I've never had anything in there! Please, stop!”

But he wasn't listening. He grunted as he forced his cock into my asshole then scooted forward so that he was underneath me. I screamed again as I slid all the way down onto the cops lap with the two enormous things inside me.

"I'll drive on ahead and wait for you outside the station. I can't wait to see the two of you ride up," the cop on the ground said with a big smile.