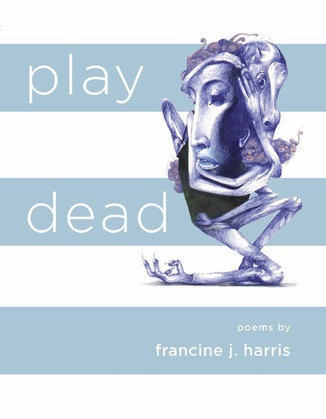 by francine j. harris (Author)
Buy for $14.99 Excerpt
Fiction Poetry
warning_amber
One or more licenses for this book have been acquired by your organisation details

"This book talks smack. This book chews with its open mouth full of the juiciest words, the most indigestible images. This book undoes me. . . . francine j. harris brilliantly ransacks the poet's toolkit, assembling art from buckets of disaster and shreds of hope. Nothing she lays her mind's eye on escapes. You, too, will be captured by her work."—Evie Shockley

Lyrically raw and dangerously unapologetic, play dead challenges us to look at our cultivated selves as products of circumstance and attempts to piece together patterns amidst dissociative chaos. harris unearths a ruptured world dictated by violence—a place of deadly what ifs, where survival hangs by a thread. Getting by is carrying bruises and walking around with "half a skull."

I have light in my mouth. I hunger you. You want
what comes in drag. a black squirrel in a black tar lane,
fresh from exhaust, hot and July's unearthed steam.
You want to watch it run over. to study the sog.

You want the stink of gristle buried in a muggy weather.
I want the faulty mirage. a life of grass.
we want the same thing. We want their deaths
to break up the sun.

francine j. harris is a 2015 NEA Creative Writing Fellow whose first collection, allegiance, was a finalist for the 2013 Kate Tufts Discovery and PEN Open Book Award. Originally from Detroit, she is also Cave Canem fellow who has lived in several cities before returning to Michigan. She received an MFA in Creative Writing from the University of Michigan, and currently teaches writing at Interlochen Center for the Arts.