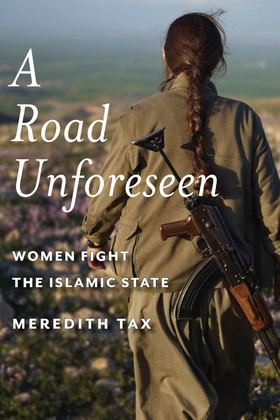 Women Fight the Islamic State
by Meredith Tax (Author)
Buy for $19.99 Excerpt
Nonfiction Social science Sociology History Other Revolutionary
warning_amber
One or more licenses for this book have been acquired by your organisation details

In war-torn northern Syria, a democratic society—based on secularism, ethnic inclusiveness, and gender equality—has won significant victories against the Islamic State, or Daesh, with women on the front lines as fierce warriors and leaders.

A Road Unforeseen recounts the dramatic, underreported history of the Rojava Kurds, whose all-women militia was instrumental in the perilous mountaintop rescue of tens of thousands of civilians besieged in Iraq. Up to that point, the Islamic State had seemed invincible. Yet these women helped vanquish them, bringing the first half of the refugees to safety within twenty-four hours.

Who are the revolutionary women of Rojava and what lessons can we learn from their heroic story? How does their political philosophy differ from that of Iraqi Kurdistan, the Islamic State, and Turkey? And will the politics of the twenty-first century be shaped by the opposition between these political models?