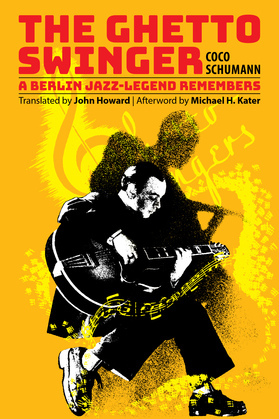 "Coco, it's not important what you play. It's important how you play it," said Louis Armstrong to jazz and swing guitarist Coco Schumann during a break between sessions. Recalling this episode Schumann reminds readers that even in the midst of real-world nightmares, music is alive and musicians experience this essential freedom and hope, which they can, in turn, give to their audiences. Throughout his remarkable life, Coco Schumann (b. 1924) would accumulate accolades, including the Order of Merit from the Federal Republic of Germany in 1989 and the prestigious Ehrenpreise Lifetime Achievement Award in 2015, and play with jazz greats Toots Thielemans, Dizzy Gillespie, Louis Armstrong, Ella Fitzgerald, and others. But few knew he relied on composing music and performing for live audiences to ease the burden of his wartime memories.

After forty years of silence Schumann's memoir opened a rare window into the previously unknown life of one of Germany's most renowned musicians, who was a member of the vibrant and illegal Berlin club scene, a part of the cultural revival of postwar Berlin, and a survivor of Theresienstadt (Terezin) and the horrors of Auschwitz.

Shortlisted for the 2017 A.R.S.C. Awards for Excellence in Historical Research in Jazz.