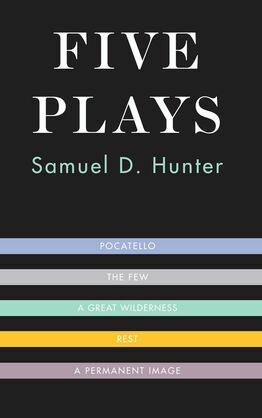 by Samuel D. Hunter (Author)
Buy for $21.99 Excerpt
Fiction Drama Nonfiction Social science Sociology
warning_amber
One or more licenses for this book have been acquired by your organisation details

"An important new voice in the American theater."—Los Angeles Times

"If there's a soul adrift—physically or spiritually—in the Gem State, chances are good he sprang from the fertile pen of Samuel D. Hunter."—Playbill

"Mr. Hunter . . . writes with unusual insight into, and empathy for, people whose lives have settled into sad stasis, or strategic withdrawal . . . [He is] sure-footed when it comes to illuminating characters from within."—New York Times

"Hunter is a playwright who crafts moving portraits of unlikely protagonists and explores the human capacity for empathy through the prism of his characters' struggles . . . Hunter's quietly captivating dramas confront the polarizing and socially isolating aspects of contemporary life across the American landscape."—MacArthur Foundation

By depicting the everyday trials of ordinary Americans, critically acclaimed playwright Samuel D. Hunter "writes with unusual insight into, and empathy for, people whose lives have settled into sad stasis" (New York Times). Hunter's compassionate eye for the quiet, lonely struggles of his Idahoan characters makes his plays desperately and painfully human. The talented writer demonstrates his knack for exposing the pathos in marginalized lives with these four poignant new plays: Rest, A Great Wilderness, The Few, and Pocatello.