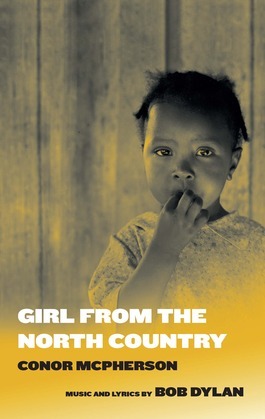 Girl from the North Country

by Conor McPherson (Author)
Buy for $14.99 Excerpt
Nonfiction Arts Music Musicals Performing arts Theater
warning_amber
One or more licenses for this book have been acquired by your organisation details

“The idea is inspired and the treatment piercingly beautiful . . . Two formidable artists have shown respect for the integrity of each other’s work here and the result is magnificent.” —Independent

“Bob Dylan’s back catalogue is used to glorious effect in Conor McPherson’s astonishing cross-section of hope and stoic suffering . . . It is the constant dialogue between the drama and the songs that makes this show exceptional.” —Guardian

“A populous, otherworldly play that combines the hard grit of the Great Depression with something numinous and mysterious.” —Telegraph

Duluth, Minnesota. 1934. A community living on a knife-edge. Lost and lonely people huddle together in the local guesthouse. The owner, Nick, owes more money than he can ever repay, his wife Elizabeth is losing her mind, and their daughter Marianne is carrying a child no one will account for. So when a preacher selling bibles and a boxer looking for a comeback turn up in the middle of the night, things spiral beyond the point of no return . . .

In Girl from the North Country, Conor McPherson beautifully weaves the iconic songbook of Bob Dylan into a show full of hope, heartbreak and soul. It premiered at the Old Vic, London, in July 2017, in a production directed by the author.

Bob Dylan, born in Duluth, Minnesota, in 1941, is one of the most important songwriters of our time. Dylan was awarded the Nobel Prize for Literature in 2016. He released his thirty-ninth studio album, Triplicate, in April 2017, and continues to tour worldwide.