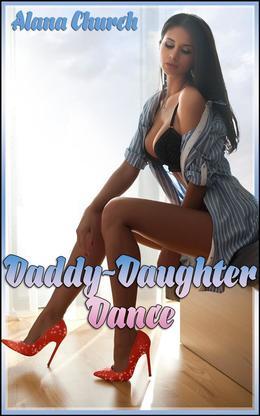 Following her mother's death, Kathryn Sparks took care of her grief-stricken father. But a casual encounter one day led her to contemplate the unthinkable. Would it be so wrong to seduce Kevin, a kind, gentle man who needs a reason to go on?

But how? A chance arises when her school sets up a 'father-daughter' dance. Now Kathryn will be forced to use all her powers of persuasion and seduction. Her father must learn that the death of one loved one is not the end of the world.

Whatever happens, their lives will never again be the same. Watch through their eyes as Kathryn and Kevin learn what it is to truly love, following the "Daddy-Daughter Dance."

The drive back to their house was quiet. “Want to get something to eat?” he asked her, as they made their way down Ogden Avenue.

“Dressed like this? At a restaurant? God, no. Can you imagine the looks we'd get? Everyone would think I was a hooker you'd made play dress-up. I'll find something to eat at home.”

He snorted, then relaxed back into the driver's seat. In the dim light, she watched his large hands settle on the wheel, so strong, so caring. She shivered. She was only minutes away from having to make an irrevocable choice. Would she have the courage to let her father know how strongly attracted to him she was? How she wanted to be his lover? Or would she take the safe way out, and hide her true feelings? And how would her mother have reacted, if she were alive to see this? Would she be shocked? Disgusted? Infuriated as her position was usurped?

Maybe…none of the above? An old memory flickered across her mind. She had been about nine years old, and had come home from school early, feeling sick. She had surprised her parents in the living room. Dad had Mom's shirt off, and his face was buried in her chest. Her mother had been making interesting squeaking noises.

Of course, that had all stopped as soon as her mother had glimpsed her. But even so, she had made no effort to cover herself until she had put Kathryn safely in bed and was getting ready to read her a story.

“What were you and Daddy doing, Mommy?” she had asked.

Even now, she had to smile at the simple reply. “We were making love,” Dorothy Sparks had answered, settling into the bedside chair. She laid a cool hand on her forehead, testing for fever.

“Oh, you'll find out soon enough,” she had replied with a mysterious smile.

“Oh yes.” The smile deepened. “It's the best thing in the world. Especially if you are doing it with someone like Daddy.“

She wasn't afraid of telling the truth. She never lied to me about sex. And she had a little bit of exhibitionist in her, obviously. After we had “the talk,” the first thing she did was get me on birth control. “I'm not going to tell you not to do it,” she said. “Because that would be stupid. Kids are going to have sex, and nothing that their parents say is ever going to stop them. The best I can do for you is to make sure you're prepared. And to tell you to be picky. You're going to be beautiful enough that you can choose who you want to be your first. So don't settle for second-best.”

I think she'd understand. She chose Dad, after all. Why would she blame me for doing the same?

She took a deep breath as they pulled into the garage, taking her out of her tail-chasing inner monologue. Whatever. Enough talk. For better or worse, I'm going to try it.