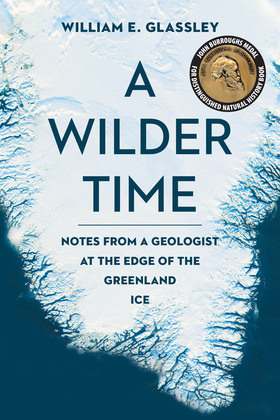 Notes from a Geologist at the Edge of the Greenland Ice
by William E. Glassley (Author)
Buy for $17.99 Excerpt
Nonfiction Nature, recreation and sports Nature Science and technics Science Earth sciences Geology Travel Specialized guides Biography & autobiography Personal memoirs
warning_amber
One or more licenses for this book have been acquired by your organisation details

"A richly literary account. . . . Anchored by deep reflection and scientific knowledge, A Wilder Time is a portrait of an ancient, nearly untrammeled world that holds the secrets of our planet's deepest past, even as it accelerates into our rapidly changing future. The book bears the literary, scientific, philosophic, and poetic qualities of a nature-writing classic, the rarest mixture of beauty and scholarship, told with the deftest touch." —John Burroughs Medal judges’ citation

Greenland, one of the last truly wild places, contains a treasure trove of information on Earth's early history embedded in its pristine landscape. Over numerous seasons, William E. Glassley and two fellow geologists traveled there to collect samples and observe rock formations for evidence to prove a contested theory that plate tectonics, the movement of Earth's crust over its molten core, is a much more ancient process than some believed. As their research drove the scientists ever farther into regions barely explored by humans for millennia—if ever—Glassley encountered wondrous creatures and natural phenomena that gave him unexpected insight into the origins of myth, the virtues and boundaries of science, and the importance of seeking the wilderness within.

An invitation to experience a breathtaking place and the fascinating science behind its creation, A Wilder Time is nature writing at its best.

William E. Glassley is a geologist at the University of California, Davis, and an emeritus researcher at Aarhus University, Denmark, focusing on the evolution of continents and the processes that energize them. He is the author of over seventy research articles and a textbook on geothermal energy. He lives in Santa Fe, New Mexico.