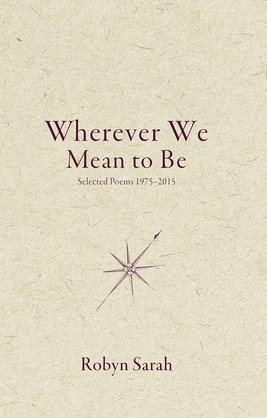 Wherever We Mean to Be

Spanning forty years and ten previously published collections, Wherever We Mean to Be is the first substantial selection of Robyn Sarah?s poems since 1992. Chosen by the author, the 97 poems in this new volume highlight the versatility of a poet who moves easily between free verse, traditional forms, and prose poems. Familiar favorites are here, along with lesser-known poems that collectively round out a retrospective of the themes and concerns that have characterized this poet's work from the start.

Warm, direct, and intimate, accessible even at their most enigmatic, seemingly effortless in their musicality, the poems are a meditation on the passage of time, transience, and mortality. Natural and seasonal cycles are a backdrop to human hopes and longings, to the mystery and grace to be found in ordinary moments, and the pleasures, sorrows, and puzzlements of being human in the world.