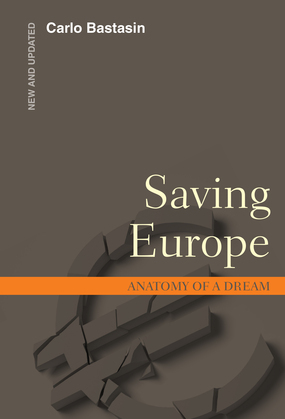 In this gripping narrative, Carlo Bastasin reconstructs the main political decisions of the euro crisis, unveiling the hidden interests and the secret diplomacy behind the scene. The European dream was both the rejection of war and the creation of a new spirit of peaceful cooperation. Yet confrontation has been the hallmark of the euro crisis, and national opportunistic gimmicks have driven the awkward attempts to solve the crisis itself. Today, Europe is in a crisis of democracy, which Bastasin has dubbed, "the first War of Interdependence of the global age."

Praise for the first edition of Saving Europe Bastasin does an admirable job in analysing the euro-zone's economic challenges and is a sure-footed guide through the seemingly endless European Union summit meetings that were supposed to resolve them. He also has an eye for the human detail that makes his sad account of institutional muddle surprisingly compelling. — Financial Times

Bastasin's book is worth reading for its detailed political narrative of the eurozone crisis to date, focusing on the interaction among decision-makers in Europe's capitals. — Foreign Affairs

A reconstruction that may be considered definitive. Revelations on the European negotiations are written with talent and go hand in hand with no-esoteric economic analysis and with the right amount of realism to reach the political substance. —Corriere della Sera

Anyone looking for general knowledge and deeper understanding of the crisis, I can recommend a formidable analysis by Carlo Bastasin: Saving Europe. The author is a very unusual combination of a qualified economist and driven journalism. —Svenska Dagbladet