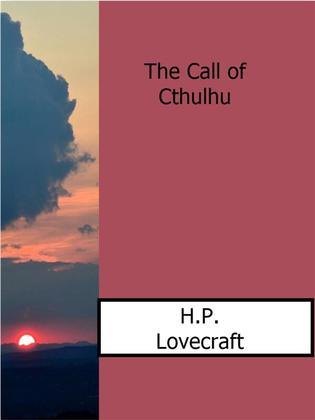 The Call of Cthulhu

by H.P. Lovecraft (Author)
Buy for €1.99 Excerpt
Fiction Horror Occult & supernatural Mystery & detective Suspense
warning_amber
One or more licenses for this book have been acquired by your organisation details

"The Call of Cthulhu" is a short story by the American writer H. P. Lovecraft. The narrator, Francis Wayland Thurston, recounts his discovery of notes left behind by his grand-uncle, Brown University linguistic professor George Gammell Angell after his death in the winter of 1926–27. Among the notes is a small bas-relief sculpture of a scaly creature which yields "simultaneous pictures of an octopus, a dragon, and a human caricature." The sculptor, a Rhode Island art student named Henry Anthony Wilcox, based the work on delirious dreams of "great Cyclopean cities of titan blocks and sky-flung monoliths." Frequent references to Cthulhu and R'lyeh are found in Wilcox's papers. Angell also discovers reports of mass hysteria around the world.