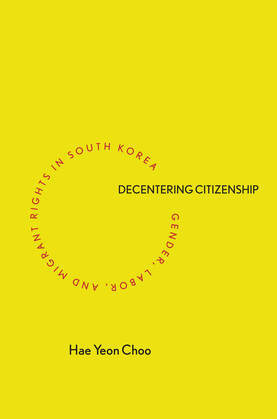 Decentering Citizenship follows three groups of Filipina migrants' struggles to belong in South Korea: factory workers claiming rights as workers, wives of South Korean men claiming rights as mothers, and hostesses at American military clubs who are excluded from claims?unless they claim to be victims of trafficking. Moving beyond laws and policies, Hae Yeon Choo examines how rights are enacted, translated, and challenged in daily life and ultimately interrogates the concept of citizenship.

Choo reveals citizenship as a language of social and personal transformation within the pursuit of dignity, security, and mobility. Her vivid ethnography of both migrants and their South Korean advocates illuminates how social inequalities of gender, race, class, and nation operate in defining citizenship. Decentering Citizenship argues that citizenship emerges from negotiations about rights and belonging between South Koreans and migrants. As the promise of equal rights and full membership in a polity erodes in the face of global inequalities, this decentering illuminates important contestation at the margins of citizenship.