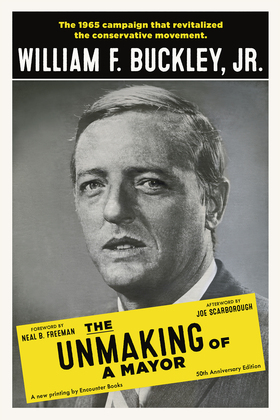 The Unmaking of a Mayor

by William F. Buckley Jr. (Author)
Excerpt Buy for $18.99
Nonfiction History History by country United States Middle Atlantic states (DC, DE, MD, NJ, NY, PA) Biography & autobiography Political
John V. Lindsay was elected mayor of New York City in 1965. But that year’s mayoral campaign will forever be known as the Buckley campaign. “As a candidate,” Joseph Alsop conceded, “Buckley was cleverer and livelier than either of his rivals.” And Murray Kempton concluded that “The process which coarsens every other man who enters it has only refined Mr. Buckley.”

The Unmaking of a Mayor is a time capsule of the political atmosphere of America in the spring of 1965, diagnosing the multitude of ills that plagued New York and other major cities: crime, narcotics, transportation, racial bias, mismanagement, taxes, and the problems of housing, police, and education. Buckley’s nimble dissection of these issues constitutes an excellent primer of conservative thought.

A good pathologist, Buckley shows that the diseases afflicting New York City in 1965 were by no means of a unique strain, and compared them with issues that beset the country at large. Buckley offers a prescient vision of the Republican Party and America’s two-party system that will be of particular interest to today’s conservatives. The Unmaking of a Mayor ends with a wistful glance at what might have been in 1965—and what might yet be.
Publication date
October 13, 2015
Publisher
Encounter Books
Page count
488
ISBN
9781594038488
Paper ISBN
9781594038471
File size
8 MB