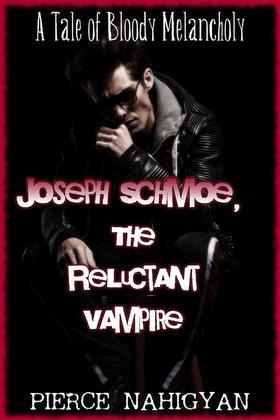 by Pierce Nahigyan (Author)
Buy for €2.99
Fiction Horror Action & adventure
warning_amber
One or more licenses for this book have been acquired by your organisation details

Joseph is a very old vampire, or at least old by vampire standards. He doesn't play the part of the gothic undead, he doesn't revel in his bloody damnation. He just exists, and very uncomfortably. When a hip young bloodsucker starts calling for a "Red Revolution," Joseph is happy to stay out of it. But the youth's insistence that Joseph join him carries with it a none-too-subtle threat: If Joe doesn't get with the program, his undead days are numbered.

In this tale of macabre melancholy, Joseph remembers the wicked betrayal that transformed him from a man into a beast. It's been more than a century since he was mortal, but a hundred years of lonely nights have not solved his existential crisis.

Joseph looked dumbly at his hands. He was dressed in a sheet, his skin was pale and his hair was plastered to his face. “Where are my clothes?” he asked.

“The clothes I gave you have been disposed of. They were old, in any case.”

Joseph smiled despite himself. His eyes peered down into his hands. He could now see the tiny granules of soot and dirt hiding between the crevices of his palms, and when he curled his fingers he did not understand the glassy resilience of his fingernails. “What happened to me?”

Bevan shifted in his chair. “You were duped,” he said.

“‘Duped?’” Joseph repeated, incredulous. “I was destroyed,” he growled, feeling the ghosts of pain flit down his back.

“More than you know,” the old man said. He leaned forward and put his hands together, fixing Joseph in his gray-eyed gaze. “Your presence here proves that you were unwilling to die when death came for you. You have no doubt felt the cold presence settling upon your head. So, whether your beliefs sustain such a statement as I am about to make or not, you must accept it, or face a second death.” Bevan swallowed, and for a moment he looked pathetically old. “You are a vampire, Joseph.” He gave a cracked, awkward smile. “You have heard the legends, no doubt.”

Joseph gazed levelly at the old man. Conjectures rose up within him, contradictions, then a cold, obstinate belief that transcended thought. Reflexively, he spun his wedding band about his finger. Without his wife, without any bearing upon the life that he had lived, how could such a thing be untrue? Nothing of Joseph’s world remained with him. Nothing to cling to or cradle. Could fate be so twisted, he thought with a bittersweet smile, that he would not only be denied Emily, but his humanity as well? He stared at Bevan, not saying a word. So be it, if it were true. Reality vanished within the cloud of bubbles that stole him from his family.

“My boys could not kill you outright, though Morgan surely intended to make you a meal,” Bevan said. “Yet I put you under my protection, Joseph, which may have been your undoing. For that, I apologize. I should have allowed the boys to murder you in the forest, but I was unwilling to let such a foul act be committed before me. I meant to do so myself when you awoke––quickly––not as Morgan would have. Yet I did not kill you, and I did not seek to have you killed. I wanted you away from my castle, to flee back to the rest of your life.” Bevan bit down on the first knuckle of his fist. “This did not sit well with the boys, who do not remember––or perhaps never knew––what it was to be human.”

“You left me with them,” Joseph said.

“The promise of monsters?” Joseph spat. But why was he angry? The thing had been done. He sighed, and fell back against the aged chair.