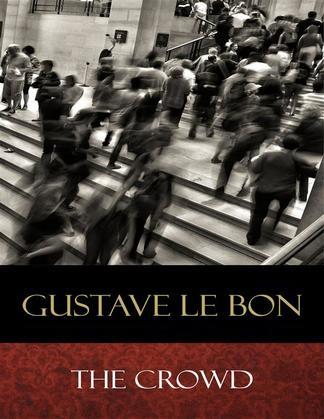 The Crowd, Study of the Popular Mind, Gustave Le Bon.

Gustave Le Bon (1841–1931) was a French social psychologist, sociologist, anthropologist, inventor, and amateur physicist. He is best known for his 1895 work The Crowd: A Study of the Popular Mind. His writings incorporate theories of national traits, racial and male superiority, herd behavior and crowd psychology.

In the book, Le Bon claims that there are several characteristics of crowd psychology: "impulsiveness, irritability, incapacity to reason, the absence of judgement of the critical spirit, the exaggeration of sentiments, and others...". Le Bon claimed "that an individual immersed for some length of time in a crowd soon finds himself – either in consequence of magnetic influence given out by the crowd or from some other cause of which we are ignorant – in a special state, which much resembles the state of fascination in which the hypnotized individual finds himself in the hands of the hypnotizer."

"The following work is devoted to an account of the characteristics of crowds. The whole of the common characteristics with which heredity endows the individuals of a race constitute the genius of the race. When, however, a certain number of these individuals are gathered together in a crowd for purposes of action, observation proves that, from the mere fact of their being assembled, there result certain new psychological characteristics, which are added to the racial characteristics and differ from them at times to a very considerable degree."

"Civilisations as yet have only been created and directed by a small intellectual aristocracy, never by crowds. Crowds are only powerful for destruction. Their rule is always tantamount to a barbarian phase. A civilisation involves fixed rules, discipline, a passing from the instinctive to the rational state, forethought for the future, an elevated degree of culture — all of them conditions that crowds, left to themselves, have invariably shown themselves incapable of realising."