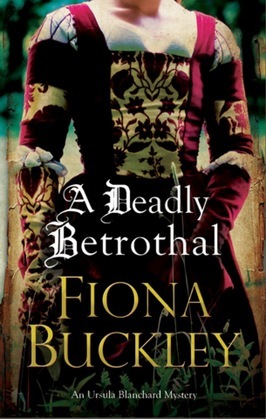 Queen Elizabeth’s proposed engagement to a Catholic Duke is causing turmoil throughout the kingdom in the gripping new Ursula Blanchard mystery.

July, 1579. Called upon to help a family friend who is horrified at the return of her errant husband after an absence of thirty years, little does Ursula realize that her involvement in the Harrison family’s domestic dramas will lead to a case of cold-blooded murder.

Matters become even more complicated when Ursula is summoned to court to assist in negotiations for Queen Elizabeth’s possible engagement to the Duke of Alençon. The proposed marriage between the queen and a French Catholic twenty years her junior is causing unrest throughout the kingdom. There are many who oppose the match – but would someone kill in order to prevent it?

Tensions increase when a prominent nobleman is accused of murder. Ursula is convinced the man is innocent – but can she prove it?