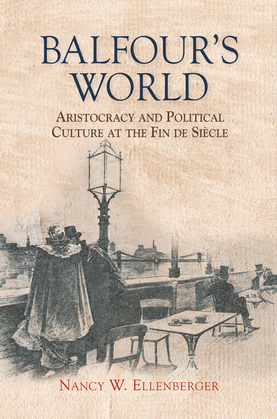 Arthur James Balfour (1848-1930) was born toward the beginning of Queen Victoria's long reign. At her death in 1901, he was a year away from becoming the first prime minister of the Edwardian era. In the quarter century after hisentry into political life in the 1870s, Britain experienced material changes and a sense of intensifying human interactions as dramatic to his generation as the forces of globalization are today. Aristocrats watched anxiously as gifted boys from the middle classes rose to the top in professional life. Culture wars over male and female behaviours erupted at home, as small wars of empire proliferated overseas. Politicians came to terms with electioneering among the masses and with a boisterous print culture that prefigured the mass media of the next century. The first great era of advanced, international capitalism affected every segment of British and imperial society, including therarefied domain of Arthur Balfour.

That changes of the magnitude that Balfour's generation faced would demand different skills, career paths or political alignments is not surprising. That they might also result in thecreation of different emotional sets and interior worlds may be more so. Balfour's World provides an intimate history of how Arthur and his friends - George Herbert, 13th Earl of Pembroke; Laura and Margot (later Lady Asquith) Tennant; Mary and George Wyndham - helped to construct a new 'emotional regime' among Britain's political elites at the fin de siècle. The rich diaries, letters and publications they left allow access both to public selves and to inner landscapes, and the mix of psychological patterns and cultural assumptions that mediated their responses to the world. As the new century began, the demeanours modelled by habitués of Balfour's world would characterizemany in the imperial elite, marking them as a clear bridge between the Victorians and the moderns in Britain's twentieth-century political culture.