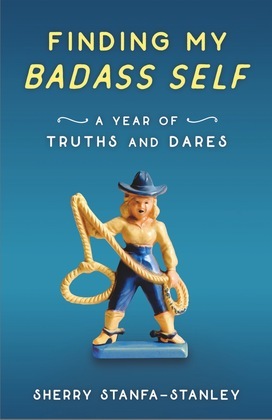 Finding My Badass Self

Fighting midlife inertia, Sherry Stanfa-Stanley chose to stare down fear through The 52/52 Project: a year of weekly new experiences designed to push her far outside her comfort zone. These ranged from visiting a nude beach with her seventy-five-year-old mother in tow to taking a road trip with her ex-husband—and then another one with his girlfriend. She also went on a raid with a vice squad and SWAT team, exfoliated a rhinoceros (inadvertently giving him an erection), and crashed a wedding (where she accidentally caught the bouquet). While finding her courage in the most unlikely of circumstances, Sherry ultimately found herself.
For midlifers, fatigued parents, and anyone who may be discontent with their life and looking to shake things up, try new things, or just escape, Finding My Badass Self is proof it's never too late to reinvent yourself—and that the best bucket list of all may be an unbucket list.