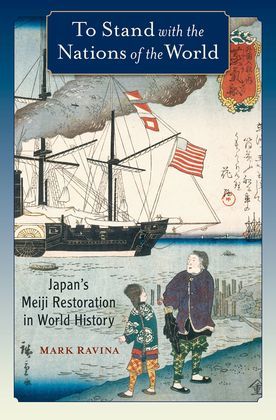 To Stand with the Nations of the World

The samurai radicals who overthrew the last shogun in 1868 promised to restore ancient and pure Japanese ways. Foreign observers were terrified that Japan would lapse into violent xenophobia. But the new Meiji government took an opposite course. It copied best practices from around the world, building a powerful and modern Japanese nation with the help of European and American advisors. While revering the Japanese past, the Meiji government boldly embraced the foreign and the new. What explains this paradox? How could Japan's 1868 revolution be both modern and traditional, both xenophobic and cosmopolitan?To Stand with the Nations of the World explains the paradox of the Restoration through the forces of globalization. The Meiji Restoration was part of the global "long nineteenth century" during which ambitious nation states like Japan, Britain, Germany, and the United States challenged the world's great multi-ethnic empires--Ottoman, Qing, Romanov, and Hapsburg. Japan's leaders wanted to celebrate Japanese uniqueness, but they also sought international recognition. Rather than simply mimic world powers like Britain, they sought to make Japan distinctly Japanese in the same way that Britain was distinctly British. Rather than sing "God Save the King," they created a Japanese national anthem with lyrics from ancient poetry, but Western-style music. The Restoration also resonated with Japan's ancient past. In the 600s and 700s, Japan was threatened by the Tang dynasty, a dynasty as powerful as the Roman empire. In order to resist the Tang, Japanese leaders borrowed Tang methods, building a centralized Japanese state on Tang models, and learning continental science and technology. As in the 1800s, Japan co-opted international norms while insisting on Japanese distinctiveness. When confronting globalization in 1800s, Japan looked back to that "ancient globalization" of the 600s and 700s. The ancient past was therefore not remote or distant, but immediate and vital.