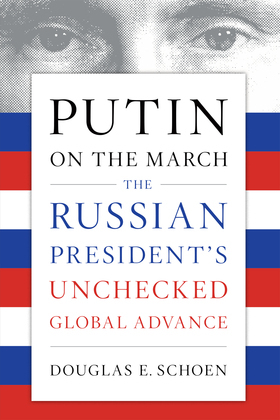 Putin on the March

by Douglas E. Schoen (Author)
Excerpt Buy for $15.99
Nonfiction Social science Political science Political freedom & security International security International relations
In his 2016 book coauthored with Evan Roth Smith, Putin?s Master Plan, Doug Schoen warned of the Russian president?s grand vision to expand his country?s influence around the world, especially in Eastern Europe, while destabilizing the Western alliance and delegitimizing the very principles of free societies—and especially the political model of democracy?s exemplar, the United States. Now, in Putin on the March, Schoen brings the story up to date, warning that Putin?s mission is no abstraction but rather an active, ongoing campaign, and one that the Russian president has pursued with far more successes than setbacks. And Schoen warns again that the United States continues to lack a coherent plan for combating Russian aggression, political intrigue—including the cyberwarfare that has upended American politics—and the communications and propaganda offensive that seems continually to keep the Western democracies off balance.

In Putin on the March, Schoen examines Russian moves across a range of geopolitical areas, including Moscow?s sustained menacing of its Eastern European neighbors, especially Ukraine, and analyzes Russia?s current posture regarding energy markets, the diplomatic situation, espionage and cyberwarfare, and Moscow-Washington relations. This follow-up reveals that Schoen?s previous warnings have been borne out. Under Putin?s leadership, Russia is achieving success in the three key areas in which it needs to prevail: foreign policy; control of Russian internal politics; and keeping the United States confused, demoralized, and even destabilized. Those who dismiss Putin?s behavior as unsustainable or reckless overlook the fundamental truth: he is getting away with it, and the more he gets away with, and the longer he does, the stronger he becomes—especially as the Western democracies grow more fractured both from their own internal problems and from lack of consensus on how to respond.
Publication date
November 14, 2017
Publisher
Encounter Books
ISBN
9781594039980