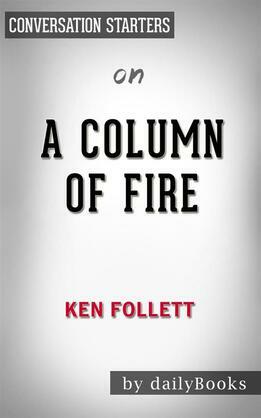 A Column of Fire: by Ken Follett | Conversation Starters

A Column of Fire: by Ken Follett | Conversation Starters

A Column of Fire is the latest novel by author Ken Follett. Returning once again to Kingsbridge, England, A Column of Fire is the story of a country torn apart by religious intolerance. In 1558 England, Mary, Queen of Scots, who is better known as Bloody Mary is on the throne. She has ordered that all Protestants be murdered  because of their religious beliefs. After her execution, her half sister, Elizabeth takes over the throne and promises to bring religious tolerance. Elizabeth is a Protestant, which turns all of Europe against England. Meanwhile, Ned Willard desperately wants to marry Margery Fitzgerald. Unfortunately, Ned is a Protestant while Margery is a Catholic, dooming their relationship.

A Column of Fire by Ken Follett has become an international bestseller, as well as a number one bestseller for The New York Times. It has been called “absorbing” by The Washington Post.