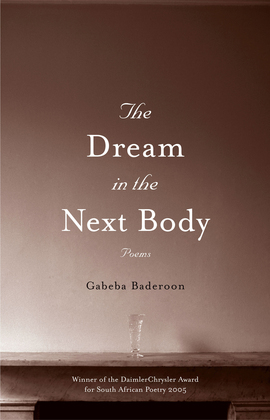 The Dream in the Next Body

by Gabeba Baderoon (Author)
Buy for $9.00 Excerpt
Fiction Poetry
warning_amber
One or more licenses for this book have been acquired by your organisation details

Gabeba Baderoon’s debut poetry collection attempts to probe the realm of the unsaid and the ripples that move between words, between people, between bodies. Sometimes the verses trace and explore details that have brought the poet to, in her own words, "arrested instants of loss or witness that break open the surface of the world". It is a collection of poems that brings one to be silent, to be still. By writing the author attempts to "see again". Like "when we are about to fall asleep ... and the mind suddenly finds itself encountering a memory - a connection ... a small meditation." Sean O’ Brien says of her work:  Baderoon’s work involves the steady, scrupulous contemplation of questions of identity and meaning. It is lucid, surprising and graceful. It balances the melancholy of departure and solitude with the utopian suggestion that there will, in time, be grounds for general celebration.