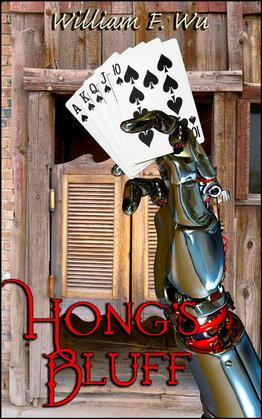 by William F Wu (Author)
Buy for €0.99
Fiction Science fiction Adventure Action & adventure
warning_amber
One or more licenses for this book have been acquired by your organisation details

In this light-hearted, futuristic Wild West, Louie Hong, the young, all-human cousin of a cyborg gunfighter known as “the Hong,” just wants to survive—and earn his cousin’s respect. He lives in a frontier where most people have whatever electronic cyborg parts they want and can afford. In this parody of westerns, Louie faces a conundrum when his cousin needs help with a gunfight.

This short story was nominated for the Hugo and Nebula Awards.

No one living had ever seen Hong without the big chain on his neck. No one had ever maneuvered him into the street when he didn’t want to go or beaten him at a game of cards, either. Oh, he had been known to lose a hand or two, and once even a foot, but never an eyeball or a new joint.

He was lean, wiry, and stainless. His arms were gooseneck molybdenum steel, one of which he won — I hear — by bluffing Salt Morass into folding with three of a kind to Hong’s nine-high.

Grudge the Smith says he charged $112,000 to make the left one, and Hong paid in cash. This was the day after Hong faced down Red-Eared Rick in the street and made him cough up the take from his last bank job — all over the ground.

Hong had one silver eye and one gray eye, and they say he was harder to stare down than a one-eyed flounder.