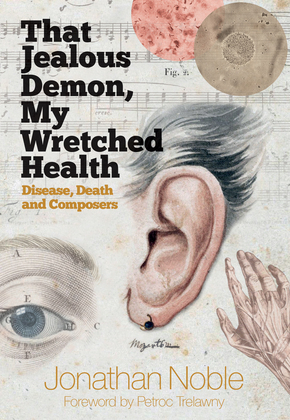 That Jealous Demon, My Wretched Health

Disease, Death and Composers
by Jonathan Noble (Author)
Buy for $24.95 Excerpt
Nonfiction Arts Music Classical Medical History
warning_amber
One or more licenses for this book have been acquired by your organisation details

The health - and especially deaths - of composers excite controversy. Was Mozart really poisoned? Did Tchaikovsky commit suicide? How did Beethoven lose his hearing? Much good previous scholarship has been sullied by unsubstantiated views, and many composers' reputations have been unfairly tarnished by scandalous commentary, often involving alcoholism or syphilis.
This book, by a Fellow of the Royal College of Surgeons, charts the disturbed physical and mental health of 70 great composers. It attempts to unpick the evidence forensically and to define the cause of death based on the legal paradigm of a balance of probabilities. The author reviews where the composer was when thefinal illness or death overtook him and considers how many of them would have fared with modern treatment. Chapters are organised thematically, by illness; and numerous misconceptions, such as madness fuelling creativity, are challenged. The book relates the nature of composition to composers' suffering, showcasing much triumph in adversity, and, importantly, rehabilitates reputations.

JONATHAN NOBLE is a retired surgeon, who has spent many years researching the illnesses and deaths of composers. He is a Fellow of the Royal College of Surgeons and was President of the British Association of Knee Surgeons as well as the British Orthopaedic Sports Trauma Association. He looked after Test cricketers, Manchester United, and dancers and musicians in the North of England.