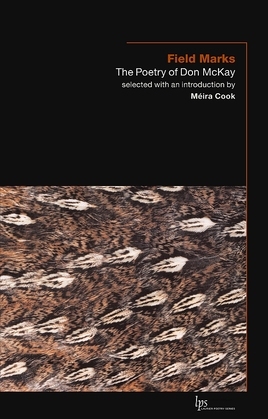 This volume features thirty-five of Don McKay?s best poems, which are selected with a contextualizing introduction by Méira Cook that probes wilderness and representation in McKay, and the canny, quirky, thoughtful, and sometimes comic self-consciousness the poems adumbrate. Included is McKay?s afterword written especially for this volume in which McKay reflects on his own writing process?its relationship to the earth and to metamorphosis.

Don McKay has published eight books of poetry. He won the Governor General?s Award in 1991 (for Night Field) and in 2000 (for Another Gravity), a National Magazine Award (1991), and the Canadian Authors Association Award for Poetry in 1984 (for Birding, Or Desire). Don McKay was shortlisted for the 2005 Griffin Poetry Prize for Camber and was the Canadian winner of the 2007 Griffin Poetry Prize for Strike/Slip. Born in Owen Sound, Ontario, McKay has been active as an editor, creative writing teacher, and university instructor, as well as a poet. He has taught at the University of Western Ontario, the University of New Brunswick, The Banff Centre, The Sage Hill Writing Experience, and the BC Festival of the Arts. He has served as editor and publisher of Brick Books since 1975 and from 1991 to 1996 as editor of The Fiddlehead. He resides in British Columbia.