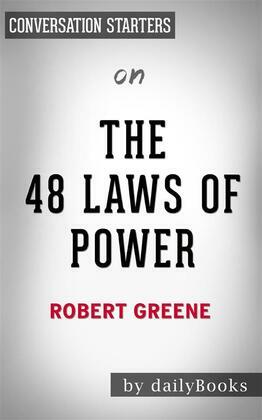 The 48 Laws of Power: by Robert Greene | Conversation Starters

The 48 Laws of Power: by Robert Greene | Conversation Starters

In “The 48 Laws of Power”, readers are provided with a fascinating and comprehensive summation of the history of power, spanning thousands of years. Drawing from such well-known philosophy and the teachings of those such as Machiavelli and P.T. Barnum, the novel combines each thread with masterful skill and attention. Each “law” described in the novel is meant to reinforce themes of domination and teach the rules of a dangerous game.

Robert Greene delivers “The 48 Laws of Power” with striking and powerful assertions, providing readers with the tools to both crush their opponents and defend themselves from the machinations of other power-seeking individuals. A New York Times bestseller, the novel has remained a hit since its publication and continues to enrapture audiences today.