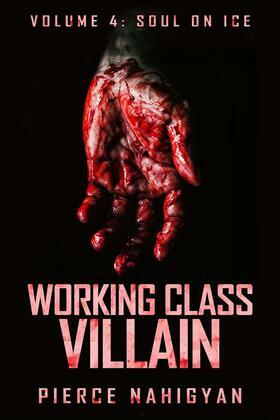 by Pierce Nahigyan (Author)
Buy for €2.99
Fiction Science fiction Adventure Horror
warning_amber
One or more licenses for this book have been acquired by your organisation details

Freddy Funke's back in prison, but not for long. The feds want him to hunt down Lily, and Hollywood wants him to be a star. If they can bust him out, this one-time slacker-turned-criminal-mastermind will sign on the dotted line. Unfortunately for them, Freddy's tired of being told what to do. The new mayor has pledged to make Old Polly great again. Mr. Big Stuff is going to burn it to the ground.

The Man grabbed at Hierophant’s wrist and threw him into the grill of the Ford. Freddy shielded his face from the shards of the shattered windshield.

Hierophant pried himself out of the hood. He jumped up onto the cab and ripped the pump and console off the velcro. “It’s been fun swatting you around like a tee ball but I don’t think I can take much more. Weaving the plexus into this body was only a temporary patch, and I can feel the organs collapsing.” He pressed the central button on the black console. The engine shivered assent and next to Freddy the thick belt on the passenger side spun the pickup motor to life. The barrels rotated. Hierophant pressed another button and they rotated so fast the metal squealed like a pig trapped in a helium abattoir.

On the penthouse floor The Man lurched forward. The cannon squealed and shifted. “Before you take another step,” said Hierophant, “it’s only fair that you know what you’re up against. This, my invincible dearheart, is the General Electric GAU-8 Avenger. It fires a 30 millimeter round of depleted uranium, a four to one mix of PGU-14/B armor piercing incendiary and 13/B high explosive incendiary and it fires them at forty-two hundred per minute. I can only use it for a few seconds at a time though, as I’d ruin the barrels.” Hierophant manipulated the console to aim the cannon at The Man’s helmet. “I’m not sure if you’re familiar with pyrophoric artillery, Gordon, but the rod fractures on impact with a hard target to stay sharp. And then disintegrates into a very hot dust. You see, the Avenger is typically found on the United States Air Force’s Fairchild Republic A-10 Thunderbolt II. It kills tanks.” Hierophant leaned over his knee. “The Professor thought it was an expensive insurance plan. I didn’t.”

Hierophant’s face appeared in Freddy’s window. The blood from his lacerated lips ran down into his mashed nostrils. “There’s a pair of ear muffs under the wheel that I suggest you wear. Also, the recoil force is about five tons so I’m going to need you to step on the gas and keep the pedal down at fifty miles per hour, give or take.”

The ear muffs hardly helped. No sooner had Freddy slid the cups over his ears than the hydraulics screamed and the Avenger sneezed the wall down. The flash was so bright Freddy screamed aloud. He kicked at the accelerator when the Ford crashed out the back of the elevator cage and tried to bust through the opposite wall. The window frame, mahogany desk, carpet, edge of the floor disintegrated, and it may as well have happened to the ghosts of those things as they went to dust in the rapidly swelling smoke, and made no sound that could exist in the same world and hour as the cannon. Then the first five seconds of it were over and the Ford flew over the balcony.

He didn’t bother to scream this time, he just gripped the wheel tighter and slammed the accelerator down. The lights in the rain rose like shimmery stars in a galaxy friendly and vast. The tracks of car headlights and tail lights crisscrossed the backs of Old Polly’s rising towers, the wind singing in the rain, and he drove in free fall.