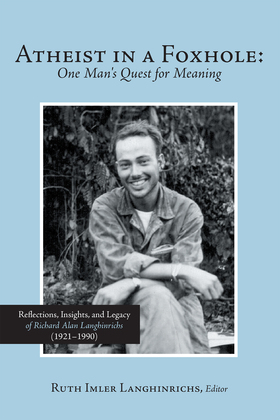 Atheist in a Foxhole: One Man's Quest for Meaning

The life of Richard Alan Langhinrichs is a remarkable journeyin his own words as he struggles with his personal demonsand in the words and remembrances of his family, friends and colleagues. He was awarded two medals for valor in Saipan during WWII, where he proclaimed, There are atheists in foxholes, because Im one.

Dick enrolled in Northwestern University at the age of 17, joined a fraternity, and wanting to appear blase because he was on a full scholarship, was able to fulfill this ambition, partly because he could play the piano with panache and savoir faire by imitating George Gershwin.

At the wars end, he headed to New York City for a stage career while writing a novel and pursuing his lifelong quest for meaning, but years later his midlife crisis changed the course of his journey. The ministry would become his career, but not until he had been a struggling novelist, a successful real estate agent in New Yorks Greenwich Village and a highly paid business executive in Detroit.

Dick was a prolific reader and books that influenced his philosophy and his quest for meaning are listed as Sacred Texts at the end of Part I: One Mans Journey.