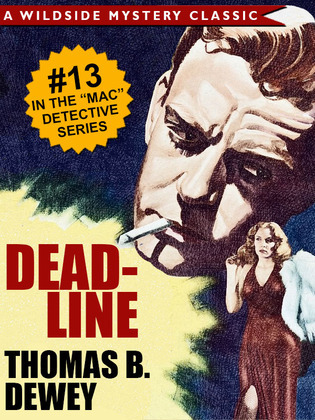 by Thomas B. Dewey (Author)
Buy for $3.99 Excerpt
Fiction Mystery & detective
warning_amber
One or more licenses for this book have been acquired by your organisation details

Deadline sends Mac to a small town on a tight deadline to save a boy from execution for a brutal murder. Mac makes a beautiful job of it despite the townsfolk's violent hostility.

#13 in the Mac detective series!

"Mac is one of our best private eyes." -- San Francisco Chronicle

"Thomas B. Dewey is one of detective fiction's severely underrated writers!" -- Bill Pronzini

"Mac has been called one of the most believable and humane PI's in crime fiction. He is reluctant to use either his gun or his fists, but will do so when the situation demands it, or in self-defense; he doesn't merely solve his clients' cases, but provides moral support and sympathy as well; and perhaps most notable of all, Mac feels, and is not afraid to show itópain, loss, sorrow, loneliness." --thrillingdetective.com